Some generic rules that you can find on wikipedia:

It’s the method for recording and describing the moves in a game of chess. I will put here the main characteristics:

The board is a 8x8 checker with coordinates: 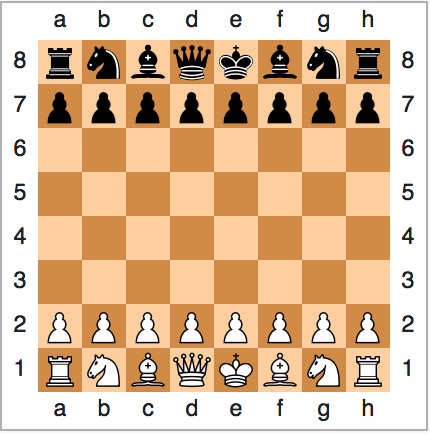 To implement such a game, you could start simple and follow TDD (Test Driven Development). For that you would start by writing a test for a simple feature, then expand and add more feature.

At each step, you first write a failing test, then make it pass, to finally refactor. The refactor part lift of the “over thinking” that may happen in the “make it pass” phase. Because first you want it to work, then you can think about any pattern, or how to make the code more readable / thinner / coherent.

That way you can come move fast and write only necessary code. You can check Refactoring by Martin Fowler. It’s a well known book about what is refactoring and how to apply it.

Example: Have a Pawn ♟ on the board

You could start with a basic test, you don’t need it to be perfect. As you write your test, the classes, and objects does not exist yet, so you can go as you want.

Then you can start implementing. I won’t go into details there, as you go the code may evolve (with pattern and encapsulation), and you may also refactor the tests as you may not want to have the ChessBoard instantiation done in a before() method.

You may want to cover the “unhappy” path too, for example trying to add a Pawn ♟ in a9 which is not a valid position.

Then once you can have Pawns ♟ on a board, you can think about what could be the next steps:

Then you can be me more fancy and add some “display feature”, or save feature, etc … Each time following the same principle of writing a failing test, make it fail and refactor.