GitHub provides some interesting tools such as the Project tab which allow creating cards based on PR or issues. It provides some automation out of the box, but as of now, it’s a bit below what you can have with Gitlab.

The project can be customized as a kanban board to track the work, like PRs in progress, in review, ready to merge… Since it’s tedious to create card manually, here’s how you can create you own GitHub action to do that automatically for you.

In the context of multiple people/teams contributing to the same code base, we want to enhance the review process

Having members and owners the PR must first be reviewed and approved before being merged. The board will allow the PR to be visually separated between the ones that are:

In a context where there’s a lot of teams, or a lot of PR visually separating the PR by states will facilitate the code review and merging process.

Let’s get set up with what GitHub offers out of the box.

Let’s go back to the basics so that we understand what we’re doing.

Let’s generate a token, with admin:org rights for your personal token. If it’s for your own usage only, the default secrets.GITHUB_TOKEN accessible in the workflow might be just enough. To automate the new beta project feature you might need more rights. 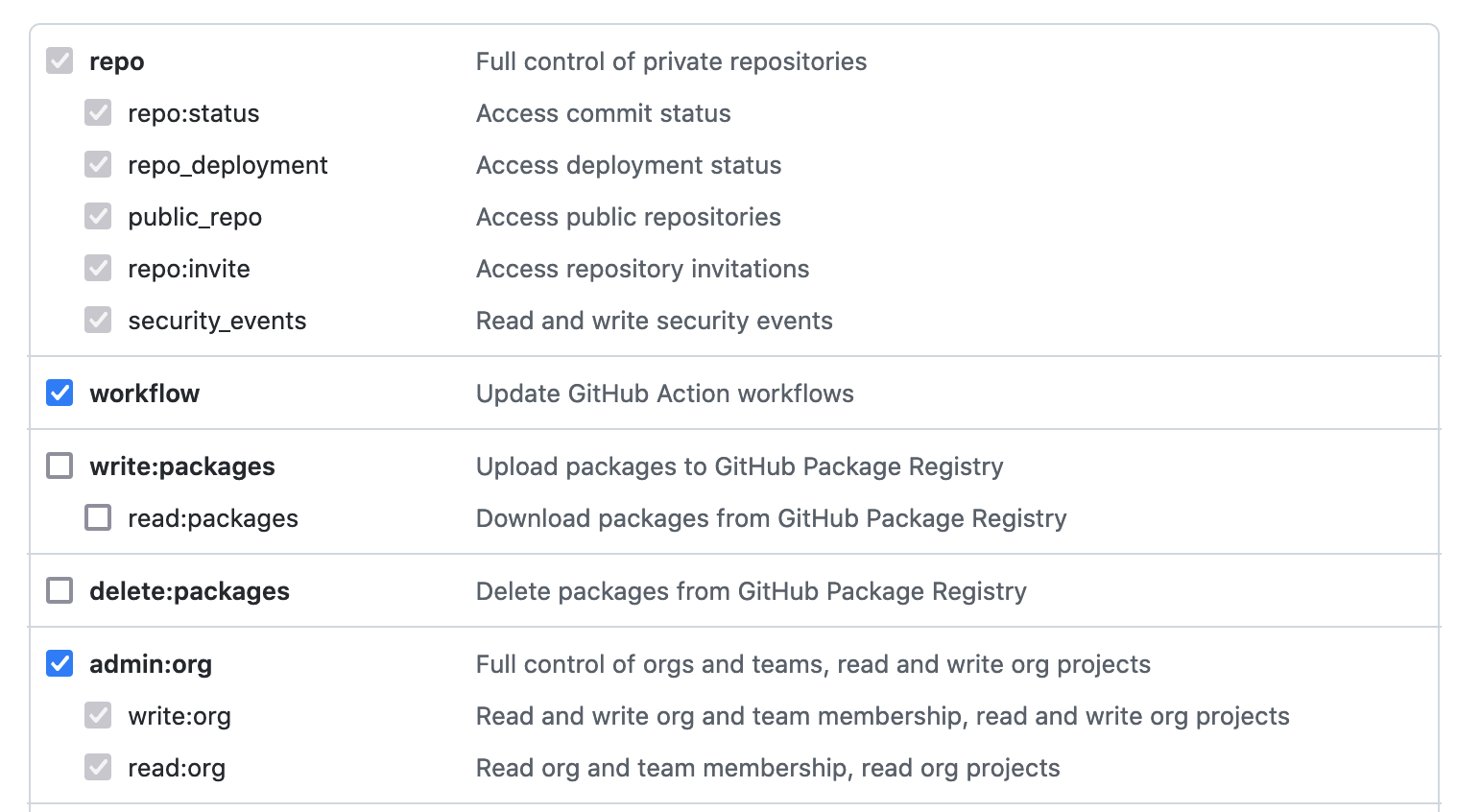 The GitHub rest API allows you to interact gain access to its resources. Those are the bare-bones commands that are usually wrapped in a library for ease of use in your language.

Here you need a token with at least read access to read the pull request in the repo.

So once we have the id, we can move to the next step which is to create the corresponding card on our project board. The api reference is in my opinion a bit lacking, so here is a working example:

The column_id correspond to my in progress column and can be obtained on the URI when clicking on copy link on the top right three dots button.

Note: You need to specify the column id twice… for fun 🤡

With that the card is created for this PR. If you try it again, it will fail as there can only be one card per PR per board.

We’ll create a GitHub action that will do the card creation in the project for us. We’ll use the github-script action which uses Octokit to interact with GitHub’s API.

There are two things we need for this action:

We’ll manage those thanks to the GitHub actions various features.

We want to trigger the action on new Pull request, when they are opened. The default pull_request event reduces for security reasons the rights given when running the action, to prevent malicious code to be injected or run and deploy via the CI/CD pipeline.

In order to bypass that for our use case, we’re going to use the pull_request_target event which does not downgrade the rights, meaning we’ll be able to access the repository secrets to make the call to the API to create the card based on the PR.

The context from the github-script is an object containing the github context which holds a lot of contextual information. It’s wrapped up nicely, so it gets easier to use you can display it all by creating a small action such as:

In our case the pull request id on a pull_request event, we’ll be in context.payload.pull_request.id, where the payload is the event’s one.

Now that everything is set, let’s dive in the actual action add-pr-card.yml which will automate part of our process:

Some caveat and notes in the use of the script:

That’s it, now you can add the action and enjoy it! 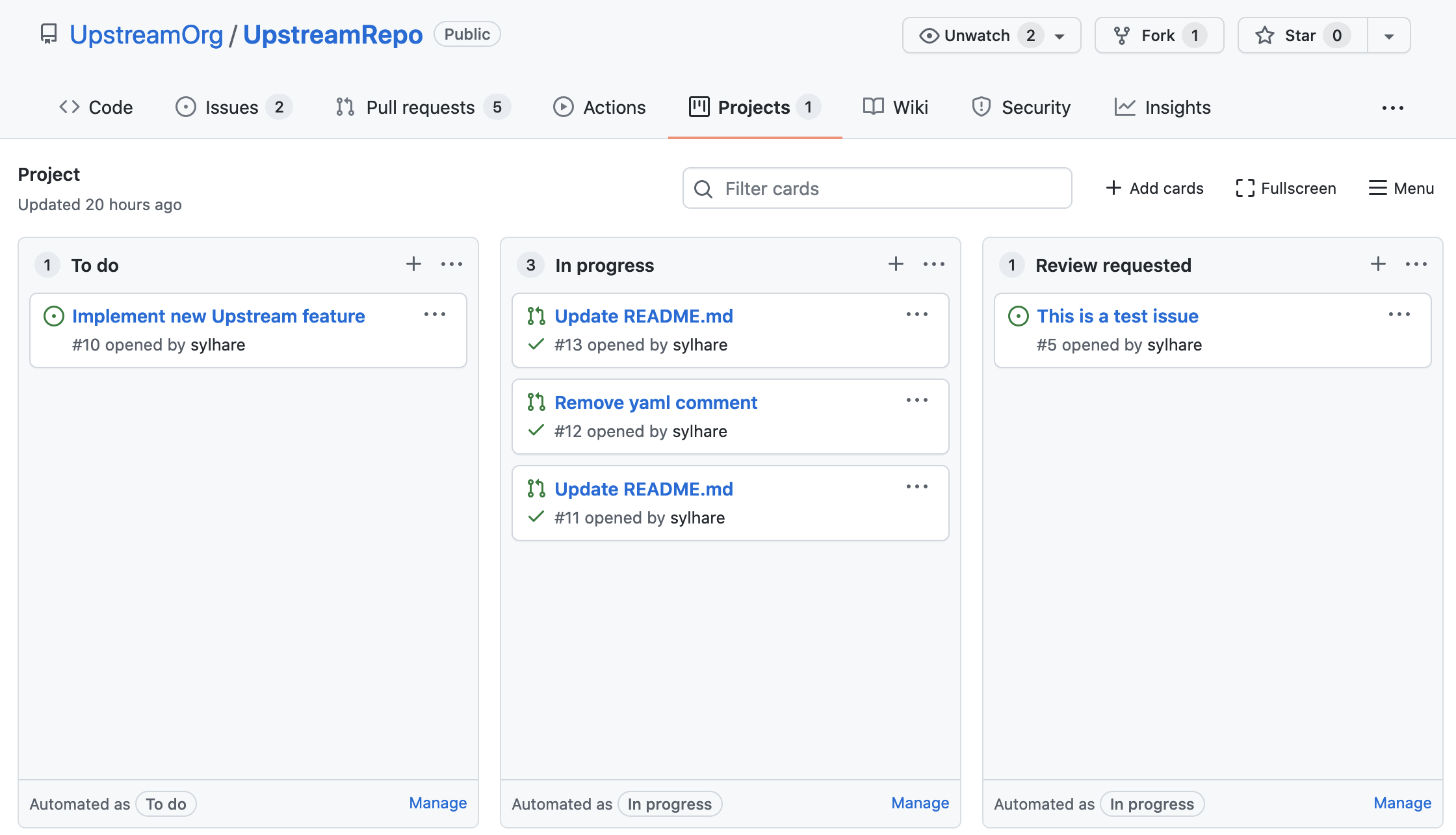 👉 The script is now ready to use, find a live example usage on UpstreamOrg/UpstreamRepo. 🍔

Some errors are a bit obnoxious, so here is are some troubleshooting help. Those are the one I experienced using both the API and the github-script.

When using the API you may encounter:

This one is pretty clear, it’s a right issue related to your token. Apparently the basic right you need in you personal access token for any API call is repo > public_repo.

For any types of data issue, using the API you will receive some message such as:

This can happen on missing or incorrect payload for example. Or when using a PR number instead of the PR id.

When using the github-script action you may see this error:

In that case I checked my personal access token, and it was never used meaning it didn’t even try to get the resource using my token. That’s when I discovered that this issue is often related to the downgrade of rights on none pull_request_target event which would make the secrets inaccessible, hence empty.

So this is also a privilege issue, make sure you’re using the right trigger if you need more than the GITHUB_TOKEN.

When using the github-script action, I encountered this error:

The wording through me off because the token I was using did work with API before. In the end this meant that the script that I was using within the action was wrong.

In my case I had used a comment in yaml which starts with # in the script part. Javascript comments are usually //, so parsing the # made it error out.

How to write Japanese 日本語 on Mac